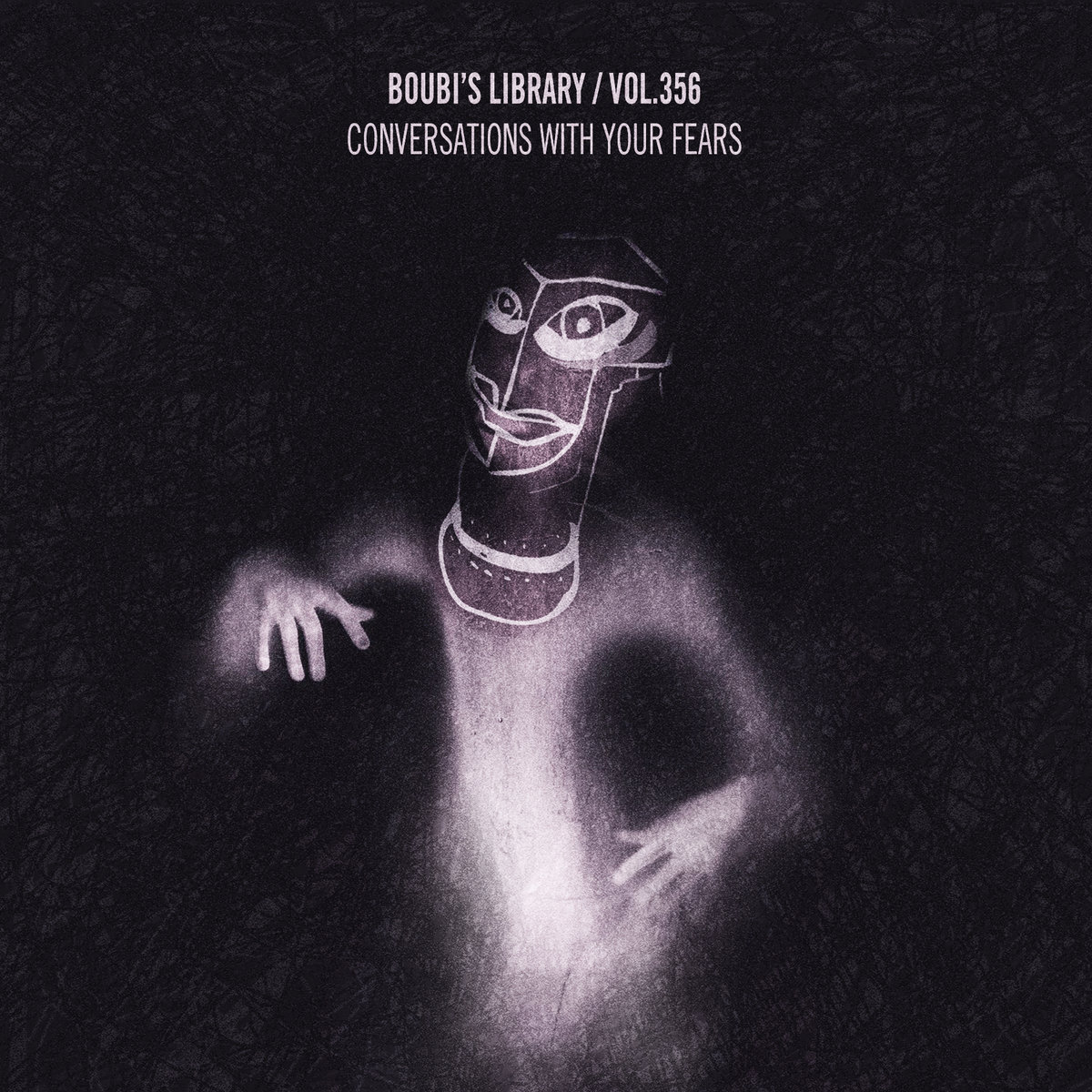 Julien « boubi » Palomo is a composer and electronic musician. He is a former Free Jazz producer with Improvising Beings. He is half of Other Matter with guitarist Michel Kristof, and a quarter of United Slaves with Makoto Sato and Vinnie Paternostro. His solo work has been published by Mahorka, MuteAnt Sounds Netlabel, Entr'Acte, and Improvising Beings (unfair! unjazz!). He has been lucky enough to work with Eric Zinman, Henri Roger, Henry Herteman, Massimo Magee, Christine Webster, Fabien Robbe among others. Other aspects of his career are rather infortunate, on the other hand, and won't be told here.

CONVERSATIONS WITH YOUR FEARS 1 – Library vol. 356

"This music was recorded in June of 2017 and I had no clue, absolutely no clue. What was I thinking, really? Leave me alone with my «System» (4 modulars, numerous old-school keyboards and digital synths) for a few days, and I will deliver a useless monument of textural experimentation, instead of a statement. I am French, that must be the Mallarmé in me, the précieux. Yet I wish I had more of Camus, more action, more meaningfulness. I must give credit to Ivo Petrov: he was the first producer to give a chance to my solo work in 2015. From the start I was delighted that my producer was a man of Science instead of a man of the Arts, by 21st Century accounts. Six centuries ago though, there wouldn't have been much of a difference. The educated man of the Renaissance was both. Man of the Arts, man of Science, it was a continuum. I feel we would have fitted perfectly. On the other hand, there sometimes isn't anything for us in the present times. Hand in hand in the 5 years that have elapsed, we've trodden the path that goes up from the Modern Burnt-Out Insomniac towards Hope, back to Melatonin, restlesness, anger. And up again. Nothing stable in this century.

Melatonin For Angels, our first project... Instant digression: OUR project. I draw a line between works I release/throw away all by myself on some obscure corner of the web, and works I offer to producers. They ARE part of the process. I can't compose from scratch. I have something and/or someone in mind. It's there. To be more precise: it's so present I could burst, it's an obsession, I have to get it out. The present work, Conversation With Your Fears, is filled with anger, anguish, it's a personal hell. I composed it with Ivo Petrov in mind, specifically. That doesn't mean he angered me – that doesn't mean I associate our friendship with anguish – that means that we both understand our work together as cathartic. We trade ideas in feelings, and with a bit of inspiration and hard but intuitive work, I turn out a piece that is almost intended as a medicine for both of us.

Medicine can be hard to swallow. Melatonin For Angels, our first project, was mild. You need to get your circadian rhythm together, friends. But once it's together, it's good, it's all good. And we hadn't talked that much, by then. I was still fumbling my way out of Free Jazz and free improvisation, testing the waters of electronic music, and my compositions were quite sophisticated loops, but loops, still. The second project, Woke Up To No Day And My Hands Were Finally Filled With Light, in January of 2017, was one of my first orchestral works for synthesizers (cue: my mentor Alan Silva's idea of the «orchestral synthesizer»). It was also an exorcism. We both had risen over various life challenges. Medicine #3, Conversations... Almost never saw the light of day. I sent it to Ivo. It became his favorite piece of mine. He scheduled it for release. I listened back. I freaked out. I cancelled. Sent other music, along the line of the discursive process above. Stalled again. Finally decided I wouldn't publish anything until I got my marbles together. I even remained silent for a year. Conversations didn't achieve what I heard and saw in my head. The whole of 2018 I went through a compositional blackout – the aural visions and synesthetic impulses that drive my work were still painfully, obsessively present, but didn't adequately translate into music. It even prompted me to move out of my house, town, and aspects of my life, to find a new environment to reboot. It worked to some extent. I made peace with the album, gave Ivo the greenlight. You know the most frustrating part of this little whiny story you probably quit reading a while ago? I can barely recall what it was about in the first place. I had gotten lost in the whole process. I remember the rash, but I can't see the scar.

By no means is Conversations With Your Fears a work I disavow. What I just described at length – was just being honest. But it is not to say it's a leftover, a botched experiment, my least favorite composition. It just reflects something that other artists know pretty well – when your work is driven by the inner urge rather than pleasure (or $$$ commodity €€€), when you're looking that hard for that little, or big, or average Something – you get a fucking monster back. I assure you, as Ivo is considering the follow-up to this piece – the lessons have NOT been learnt. The monster has returned already, the difference is he got accustomed to the leash and we're temporarily on a good footing.

As I can't discuss the meaning of the piece, it should be the end of these notes. Not quite though. I ought to say something of the sound. Conversations With Your Fear is just me, an ARP 2600, an ARP Sequencer, and a Solina String Ensemble. A pared-down Berlin School setting? I can't deny it, there's a flavor. But it bears my signature – noise, screeches, unbalance. The patches I created for the 2600 are not from the revered patchbook of this legendary instrument. They're quite personal. I never cared using it to get « that » 70s sound (not often). The genius who designed it, Alan R. Pearlman, passed away a year ago, in January of 2018, and he too was an engineer, an artist, an accomplished Renaissance type. He knew sound can follow several paths, and his circuits left plenty room for other levels of sound. In retrospect, this work, that features his emblematic instruments only, is a tribute to his vision. It so happens in the meantime I met his daughter Dina online, and had the honor to express her my gratitude towards him. I have a special thought for another powerful artist I met sometimes after recording this album, synthesist and keyboardist supreme Lisa Bella Donna, who makes extensive use of the same instrumentarium. I like to think some of our soundscapes have something in common and that she will relate to this one. Only, she has long gotten rid of the kind of mental trash that fills my young, muddy work. It was common until the Renaissance to both dedicate the book, and invoke the protection and guidance of patrons before launching it into the wild. Conversations With Your Fear is accordingly dedicated to Ivo Petrov, and I send it respectfull to Dina Pearlman and Lisa Bella Donna."
--J.Palomo, January 2020